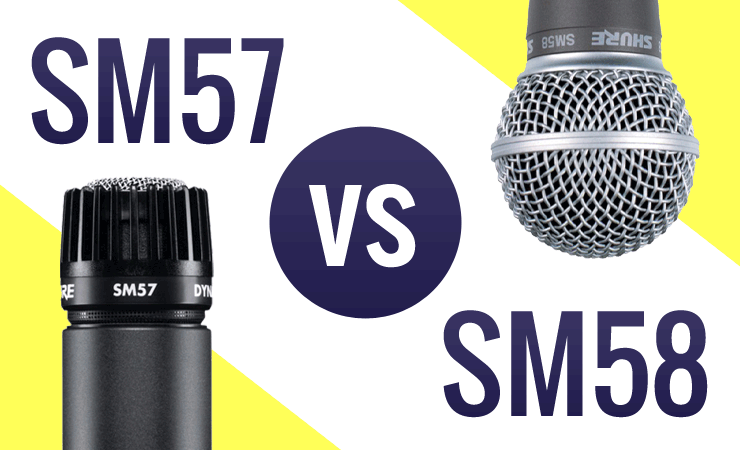 The legendary Shure SM57 and SM58 microphones have been used for countless live performances, recordings, and speeches. But what is the difference between the SM57 and SM58? Find out in this SM8 and SM57 comparison!

Shure SM ("Studio Mic") series microphones are popular largely due to their durability and versatility. Shure first introduced the SM57 microphone after developing their proprietary Unidyne microphone capsule, and released the SM58 microphone shortly after. These two models quickly became the industry standard for recording vocals, drums, and guitar amplifiers on both live and studio settings.

The SM57 and SM58 are both cardioid dynamic microphones that feature the same microphone capsule design. The main difference is that the SM58 microphone features a ball grille with a built in pop filter to reduce the plosive consonants that can sometimes occur on recordings when vocalists enunciate their "P"s and "T"s. The rugged construction and grille on this microphone also helps protect the cartridge from damage that can occur during live performance, as well as corrosion damage that can be caused by the moisture from saliva. The SM58 also features a 50 to 15,000 Hz frequency response which is tailored for speech and singing.

Instead of a ball grille, the SM57 microphone features a grille/resonator assembly integrated into the mic to allow for close mic'ing of instruments and amplifiers. Due to this design choice, the distance from the top of the grille to the diaphragm is shorter on the SM57 compared to that of the SM58, which can create a more pronounced proximity effect. The proximity effect is an increase in bass or low frequency response that occurs naturally when a sound source is close to a microphone.

The SM57 is great for recording instruments that produce high sound pressure levels (i.e. drum kits, guitar amps and brass instruments). However the SM57 is also often used to record vocals as the increased proximity effect can have a pleasant effect. It all really depends on the sound the engineer is going for and the vocals they are working with.

On top of all the features, both the SM58 and the SM57 feature cardioid pickup patterns that isolate the main sound source while minimizing background noise, which is ideal for recording. So if you're trying to decide whether you should use an SM57 or SM58, keep this information in mind and remember that you can always experiment to decide which is best for your particular application and circumstances!